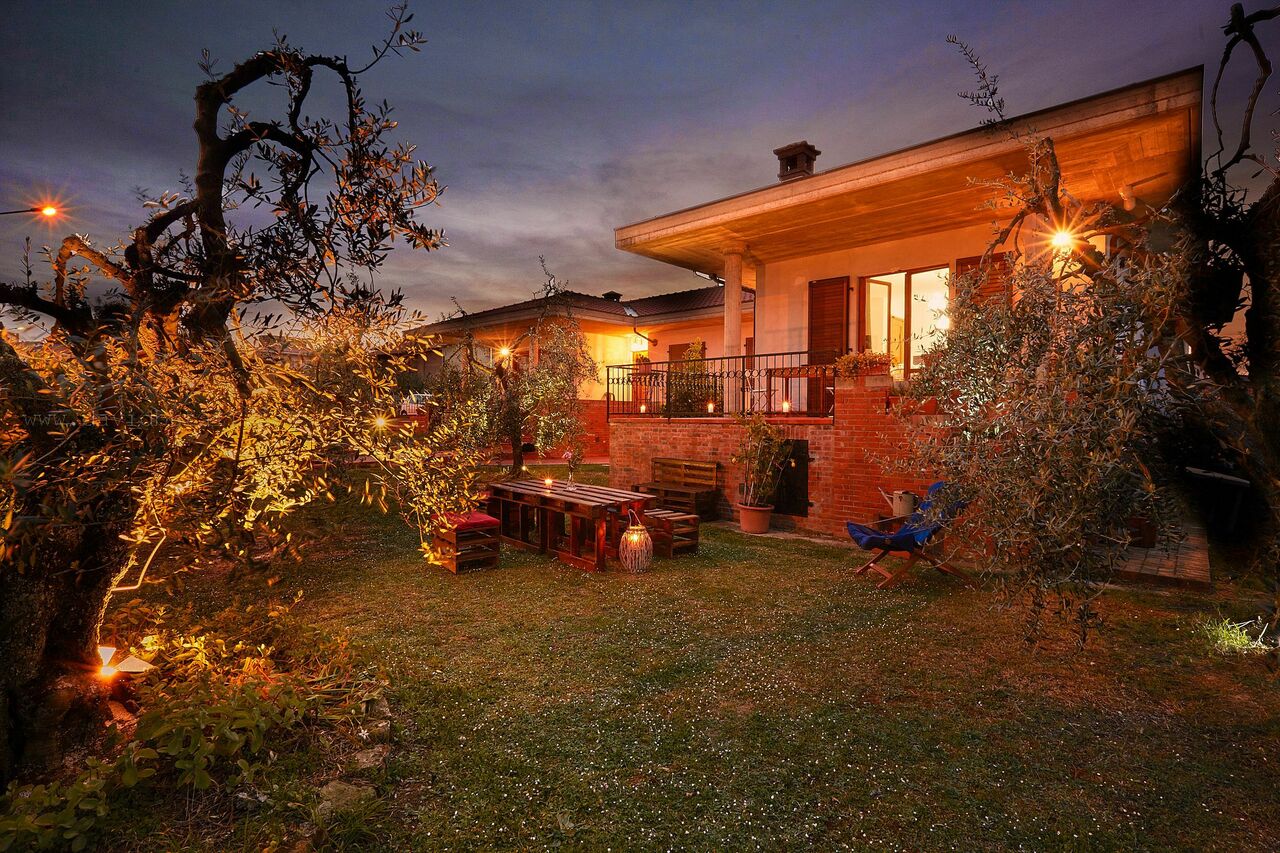 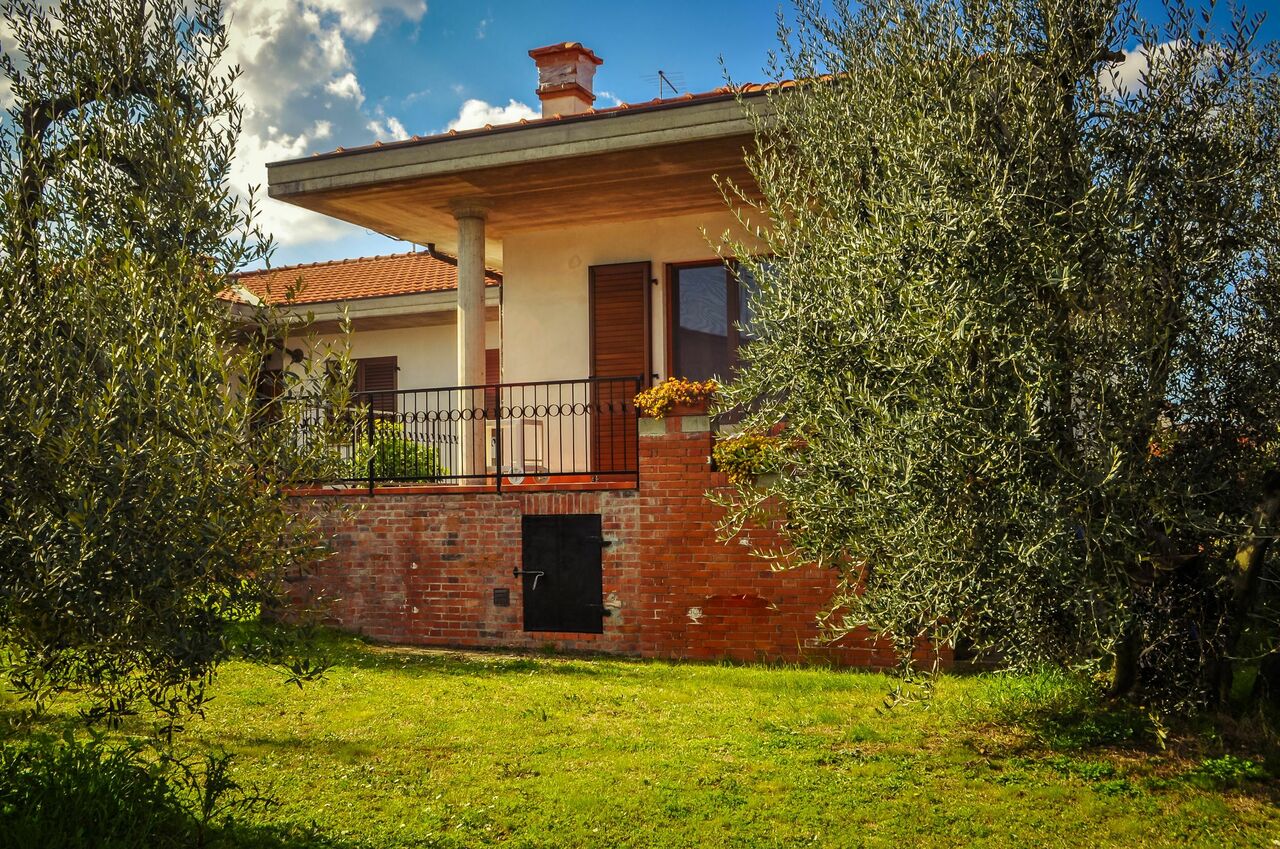 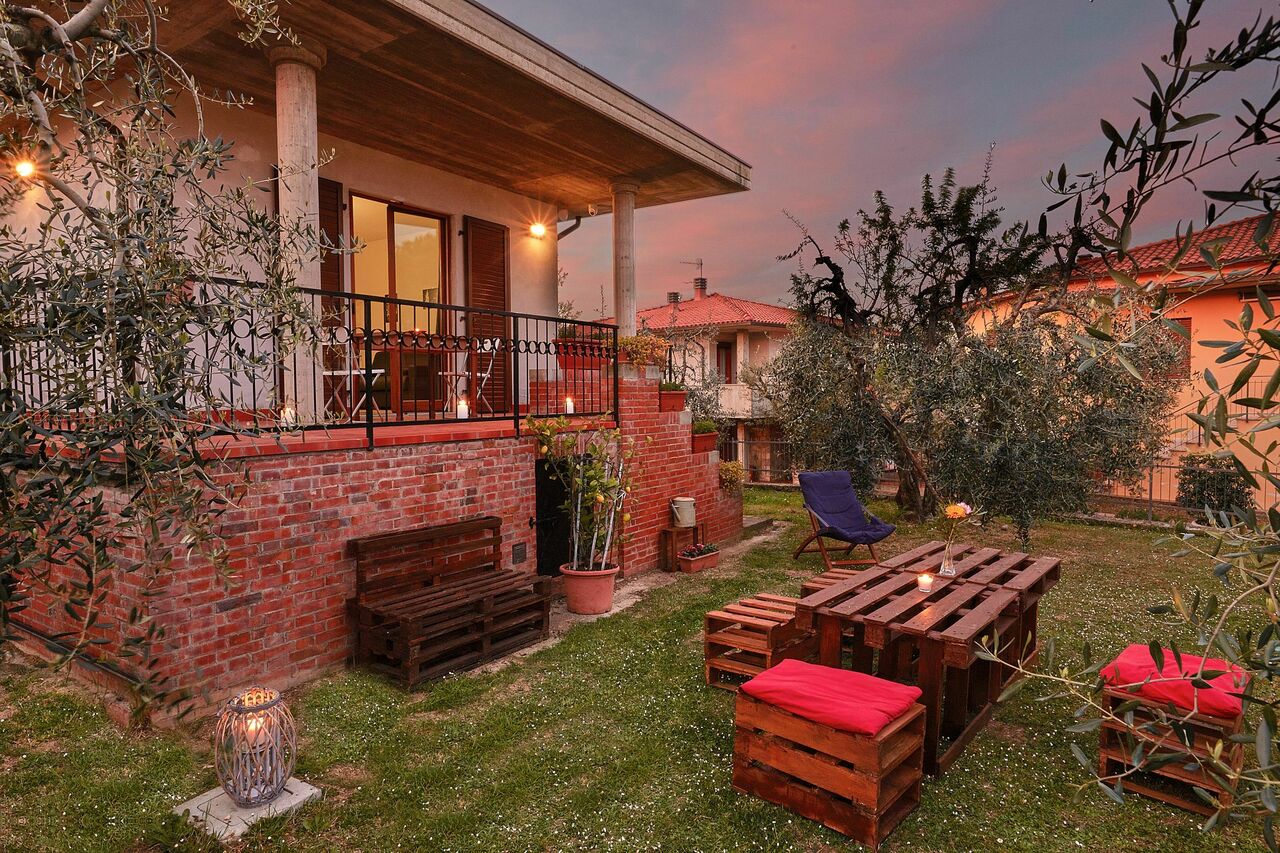 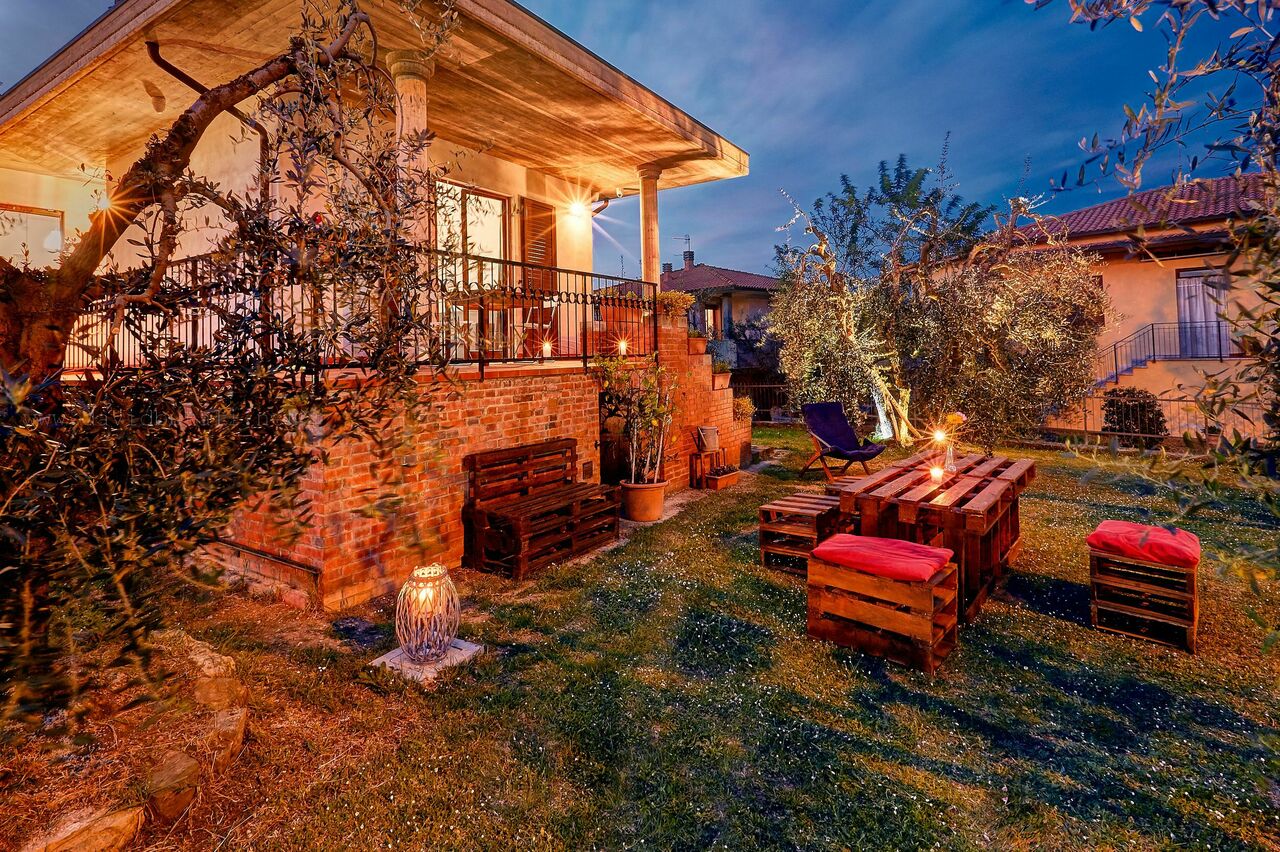 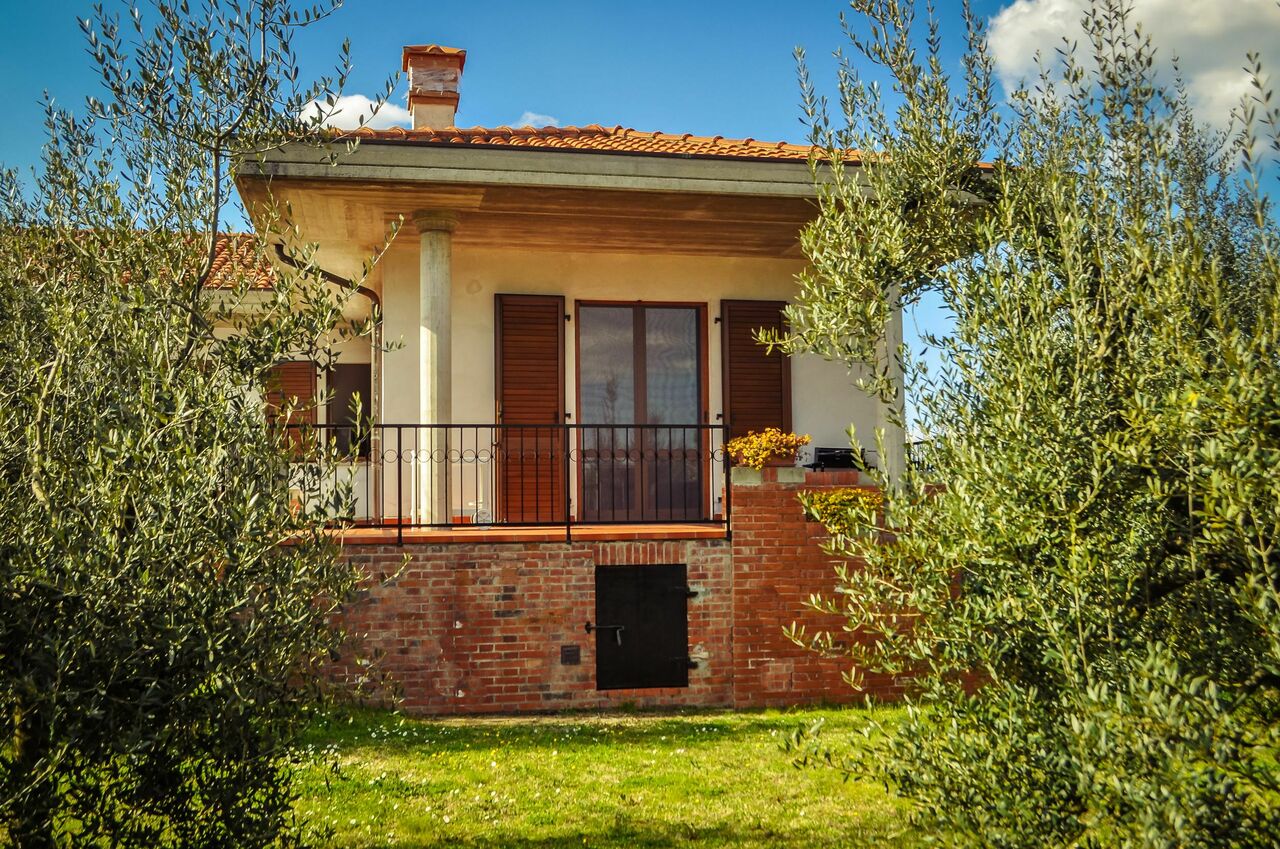 The house of Canneto is a semi-detached house located in the outskirts of Pergine Valdarno ancient hamlet near the center of the geographical triangle Arezzo, Siena, Florence. It occupies part of the hilly system between the Valdarno and the Valdichiana to the left of the River Arno. It is crossed by the railway line Florence - Rome and is served by Metro stations or Laterina Ponticino, while the motorway is easily accessible from exits Valdarno if you come from north or Arezzo for those arriving from the south. The landscape is typical of internal rural Tuscany, is covered by forests in the highest part of the hills, cultivated with vineyards and olive trees halfway and finally arable land in the valley of the Arno Scerfio and terraces left. The historic centers and farm units are placed in a higher position than the bottom of the valley and preserve the traits of the ancient medieval plants. Today this territory based on its landscape resources and economic typicality (oil that is even said to be the best in the world, which is also of high quality wine) the potential of their own development. As for the history of the important prehistoric sites discovered in the adjacent terraces major watercourses testify to the early frequenting this area by man. But it was above all the Etruscan and Roman civilization which has left significant imprints on this land crossed by important roads always lines. The same name Pergine seems attributable to the Etruscan cultural matrix. The settlement network, made up of churches, castles and monasteries in the Middle Ages redrew the map of the settlements in this area that has continued to this day. A leading role for what concerns the territory of Pergine Valdarno the lines the culture. public displays of "cattle fair" in the hamlet of Montalto between the last week of May and first of June, the "harvest festival" in the village of Pieve a Presciano the last week of August, the "feast of ' oil "in Pergine Valdarno, between the third and fourth week of November and the" cinema and socializing "award in the capital in July punctuate the rhythms of life and the seasons and provide good opportunities for cultural, economic and social whole community. Pergine Valdarno plus is the common called to represent Italy in the "Cultural Village of Europe", which is the exchange of life experiences, gastronomic and folk founded on the hospitality in family with other European families involved in the exchange itself. This experience has allowed it to families of Pergine Valdarno to have a very broad view towards people of other countries and to be very open in the hospitality industry even at the level of private homes. On the eastern fringe of the town lies the Arno river where you can still admire the remains of the old bridge Romito, which seems to be the one painted by Leonardo Da Vinci's most famous painting in the world exists, the 'Mona Lisa' or more commonly known as' The Gioconda'. From there, the Romito bridge, starts the nature reserve Bandella also called the Valley of Hell. A marshy area that occupies an area of ​​531 hectares between the Levane dam and precisely the Romito bridge. Spectacular river environment including forests, shrubs, crops with exceptional coexistence of different environments has resulted in a very interesting fauna
This modern apartment is situated in Pergine Valdarno, ancient hamlet near the center of the geographical triangle Arezzo, Siena, Florence.

Two family villa composed by 2 apartments, one for rent and one lived in by the owner.

For the safety of all the exterior of is protected by CCTV cameras that do not invade the privacy of the guests.

At guests' disposal:
Fenced garden, barbeque, baby bed, Intrnet WI-FI.
The apartment has a terrace with access to the garden.
The garden is enriched with some olive trees.

** For bookings with a reduced capacity some rooms may not be available.

Do you need help?Contact us!